These DIY Moroccan Candle Holders are a fantastic Cricut Maker project, and you won’t believe how gorgeous and exotic they look!

Since I was small, I’ve been fascinated by the exotic beauty and mystery of Northern Africa and the Middle East. As a boy, I only saw in movies and cartoons the romanticized version of the region: flowing deserts, winding camel caravans, robed nomads, bustling spice markets on dusty yellow streets and intricate and beguiling architecture.

When I grew older, I got the chance to live in the Middle East and experience some of those romanticized elements first-hand. And though reality never aligns perfectly with fantasy, much of Qatar was as I imagined.

Of all the elements of the Middle East and North Africa, architecture and interior design are most dear to me. The style is unparalleled in the West.

I love the use of privacy screens to define interior spaces. The screens are traditionally carved from wood, often with incredibly intricate patterns and repeating geometric motifs.

In the West, we’ve come to associate these screens with Morocco, a country on the northwestern coast of Africa that has shorelines on the Atlantic Ocean and the Mediterranean Sea.

From the cultural crossroads of Marrakesh, to the bustling port of Casablanca to Tangier, the gateway to the Mediterranean, Morocco has influenced and been influenced by the countries and cultures around it for millennia.

Handan and I both love the Moroccan look. She’s been bugging me since we got our new deck to build a couple of Moroccan side tables.

I haven’t started that project yet, but I’ve been keeping an eye out for an opportunity to make something with a Moroccan influence.

That opportunity presented itself when I got my hands on a Cricut Maker.

When I learned that the Maker could cut thin basswood sheets, my mind straight away jumped to making something with light, specifically with LED candles.

I saw it immediately.

I told my idea to Handan, and she jumped right on the Marrakesh Express with me.

She created the cut patterns for me to use with my Cricut Maker. Once cut, I would assemble a small base and frame and attach the Moroccan panels.

This project pushed the boundaries of my Maker’s wood-cutting capabilities, and in the process, I learned a lot about the ins and outs of cutting basswood.

Let’s have a look at how we made our beautiful DIY Moroccan Candle Holders.

The bigger candle holder design can’t be made any smaller. Believe me, we tried!

Cricut states that the knife blade should not be used to make cuts smaller than 3/4 inch, and this is good advice! They’ve arrived at that number through rigorous testing of their machines.

But c’mon. You didn’t think we’d just take their word for it, did you?

We had to push the envelope to see for ourselves!

We were able to successfully cut the 3 smaller images (which contain a few cuts smaller than 3/4 inch) with no problems. I think this is because those designs are mostly geometric.

But my Cricut Maker had big issues when trying to cut the intricate pattern on the smaller scale of the other design.

I broke one blade and got it repeatedly stuck and jammed when trying to make those cuts.

After a time, we decided to make that one design bigger and try again.

We were still technically skirting Cricut’s guidelines, as some of the cuts were below their minimum recommended width, but we were able to successfully complete 4 panels with two caveats:

Okay, let’s on with the tutorial.

When using the knife blade to cut basswood, you should always use the strong grip mat.

That blade will be making up to 14 passes, and you don’t want your workpiece moving around – not even the barest millimeter!

I positioned the basswood on the strong grip cutting mat.

Okay, the strong grip mat may be pretty strong, but it is not nearly strong enough for the kind of work I was about to put it through. Cricut understands this as well. It is why they advise reinforcing all 4 sides of the workpiece with masking tape.

Trust me, you don’t want to skip this step!

Once all 4 sides were reinforced with masking tape, I loaded the mat into my Cricut Maker and commanded it to make me some beautiful Moroccan candle holders.

Cutting complicated basswood designs on a Cricut is not a speedy process – there’s no getting around this. To ensure smooth operation for these extended cuts (you can expect to wait for almost two hours for it to cut two faces of our designs at once), it is imperative that you disable your computer’s power-saving or sleep modes. We weren’t aware of this on our first try, and the cutting operation shut down about a quarter of the way through when my laptop decided it was an awesome time to take a nap. That piece had to be scrapped.

Once our faces were cut and weeded, I brought everything to the basement, where I would assemble the frames.

I started by gluing the pillars to the bases with super glue.

Why not wood glue?

Time. I wanted to move on to the next step right away. I used those metal blocks to help align the pillar with the base. Any two square pieces of scrap wood would also work.

Okay, but why not super glue for the whole project, then?

Super glue can absorb deep into certain woods, and since the basswood is so thin, too much glue would seep through and mar the outer surface. This would be especially bad if you were planning to stain, as the glue would prevent stain absorption.

A little dab of glue…

I then guided the dowel exactly to the corner of the base using the two metal blocks as guides.

I repeated this process with the remaining pillars. Here’s a prime example of Handan’s photos making me look like Skullator from the planet Cranium.

And the last pillar…

It was sometime during this process that I heard my dear wife sniggling. I also noticed she was taking more pictures than usual. I know my work is interesting. But is it that interesting?

She couldn’t contain her laughter any longer.

So it wasn’t my super-interesting work, then?

Nope, what gave Handan the giggles was the sight of King RBF (Resting Bitch Face) working on his little Moroccan candle holders!

I informed her that anyone who smiles while DIYing is selling something and shouldn’t be trusted.

But if she wanted Guy Smiley, I’d give her Guy Smiley.

Would you trust that idiot?

Next thing you know, he’d be telling you that super glue makes great eye drops.1

1 My team of overpriced lawyers2 has informed me that I need to tell you in no uncertain terms that you should never (ever!) put super glue in your eye! I tried to tell them that you guys weren’t like those other blog readers. You know, the dummies who read those other blogs? Yeah, you know the ones! But they just smacked me upside the head with their leather briefcases and thrust their fingers at my keyboard.

Ahh, who am I kidding? I couldn’t even afford a pair of underpriced lawyers.

So where was I?

Oh, yeah! I was peacefully building the frame for my Moroccan candle holders with my resting bitch face…

With the four pillars glued into place, I started gluing the faces on, one-by-one.

I put a bit of wood glue into a small plastic cup.

I then brushed the glue on the parts of the frame onto which I’d place the Cricut-cut face.

I started with the longer side of the base. The basswood fits perfectly to this face.

I placed the face onto the frame.

I then tilted the frame so it was standing upright and clamped the face in place.

I used 6 clamps – two on top, two on the bottom and two in the middle. By the way, when Handan bought these little DeWalt clamps a few years back, I laughed at her and made fun of her dinky little clamps. But at some point, I needed those clamps, and I discovered that they’re awesome! So naturally, I stole all of hers and stashed them in the basement.

I’ll buy her some replacements someday if she’s a good girl.

Once the glue had set (about 20 minutes), I moved on to the opposite face.

I repeated the process for the third and fourth faces. This is the shorter side of the base. But since it has two 1/16 inch basswood pieces on either side, the face being glued on will still fit perfectly.

The small clamps wouldn’t fit around the entire candle holder, so I used some heavy scrap hardwood I had to act as a clamp for the final face. 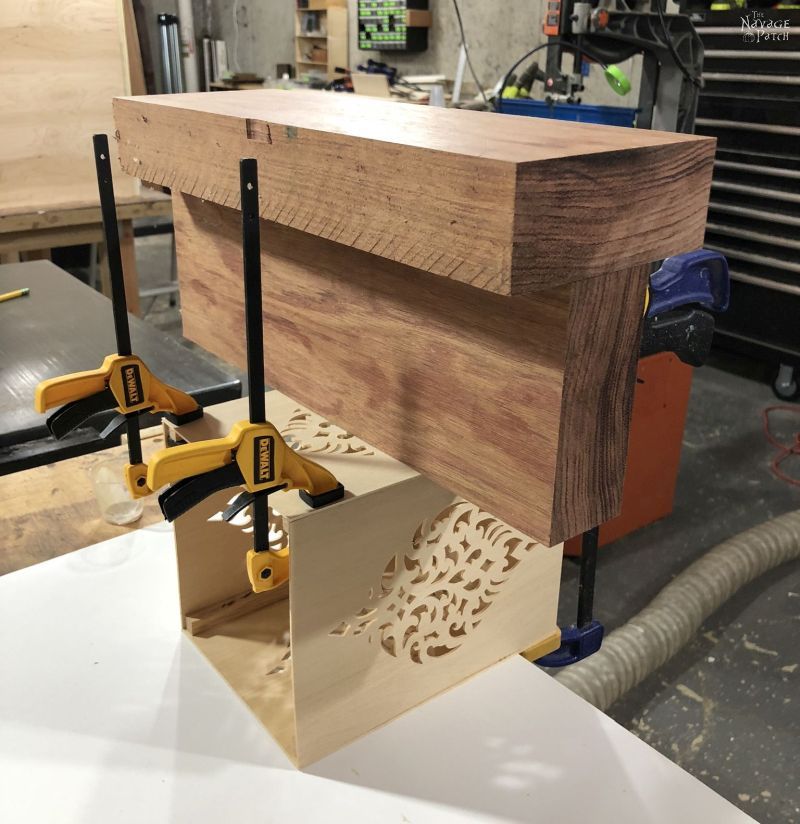 When the glue had dried, I lightly sanded the edges anywhere the fit wasn’t perfect. The basswood is very fragile, so sanding must be done carefully.

I got rid of the dust by any means necessary.

My DIY Moroccan candle holders were built! The next and final step was to seal them with spray shellac. This would have the added benefit of darkening their color a bit.

Help me caption this photo in the comments!

Since it was raining and 40 degrees, I had to shellac my Moroccan candle holders in the garage. Not sure what’s up with my left arm and fist. Chalk it up to “Handan strikes again.”

The clear shellac really warmed up the candle holders. I’ll bet amber would look amazing, too!

After 3 coats of shellac, I brought my candle holders inside the next morning. That’s when we discovered warping along the top edge. I quickly cut some dowel pieces to fit along the upper edge between the pillars, and the problem was solved.

Let’s take a look at some beauty shots! First, the day view…

As usual, here is some information on these free downloadable Moroccan patterns: we created today’s freebies as JPG, PNG and SVG files which are resizable and compatible with Cricut and all other cutting machines.

I hope this post was very useful for you. I would love to see your creations.
Do you have any questions or comments? Leave me a comment below – I would LOVE to hear from you!